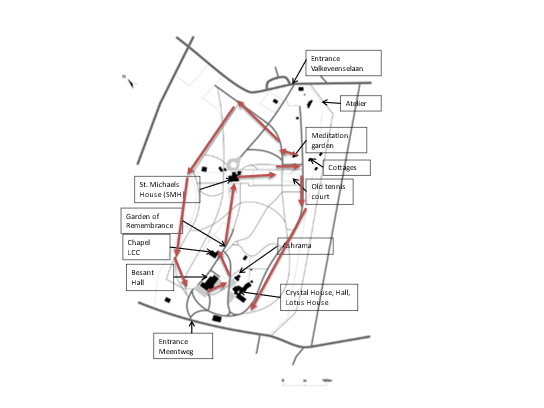 The ITC is the European home of the Theosophical Society (TS) which has its headquarters in Adyar, India. The Centre has a unique atmosphere. As all its activities are related to the higher aspects of life, the Source of Wisdom and Love, it is thus connected with the finer spiritual energies. Visitors, when open and receptive to its potent stillness, can therefore be greatly helped and inspired.

Mission statement of the ITC: To serve humanity as a spiritual study and retreat Centre, inviting people to work on the process of inner transformation.

Such a process can be described as a path, an inner journey. A path without a map is like a journey without direction. This can be experienced at the ITC. We therefore invite you to take meditative walks on our beautiful estate, exploring the different lanes. This leaflet leads you along some of the main features of the Centre. For further information we refer to the site of ITC. 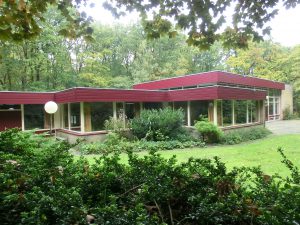 The walk starts at the Besant Hall. In the entrance hall you will find art objects of two important ladies. Helena Petrovna Blavatsky (1831-1891), the co-founder of The Theosophical Society in 1875, was perhaps the greatest western occultist and messenger in recent times. She introduced and adapted the Ancient Wisdom to suit the modern age.
Annie Besant (1847-1933), second President of the Theosophical Society (TS), from 1907 to 1933, was described as a ‘Diamond Soul’, reflecting the many brilliant facets to her character. She was an outstanding orator, a champion of human freedom, an educationalist, a philanthropist, and an author with more than three hundred books and pamphlets to her credit. In 1925, the estate of the ITC was donated to her in her capacity as President of the TS.
The Besant Hall also houses the unique Library of the ITC with over 10.000 books, bringing together the religious, philosophical, and spiritual traditions of East and West, emphasizing Theosophy and the Ancient Wisdom tradition, mainly in the Dutch and English language. Some of the many subjects included are Theosophy, Esotericism, Comparative Religion, Gnosis, Esoteric Christianity, Eastern Religions, Mysticism, Mythology, Psychology, Parapsychology, Meditation, Healing, Death and Dying, Astrology and Yoga. The library is open each Wednesday afternoon from 14.00 to 16.00 h. for a cup of tea, a book, and a chat.

The guest houses and beyond 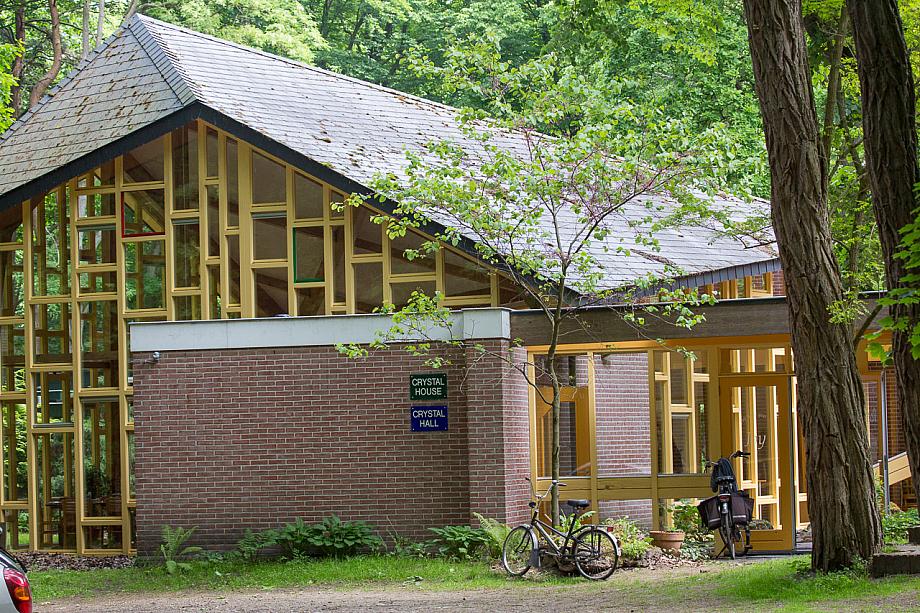 Leaving the Besant Hall from the main entrance towards the left, you will see the different guest houses.  Crystal House (1999) has twenty, and Lotus House (2019) has ten bedrooms, all with private showers and bathrooms. 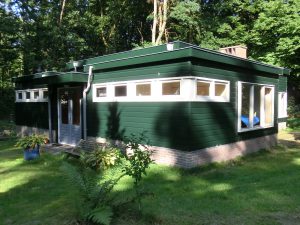 Then turning to the left you see Ashrama (1932), originally built for the Young Theosophists.

It is now used for a range of activities, amongst others for the local group of the International Order of the Round Table, a ceremonial organisation for younger people, starting at the age of six. 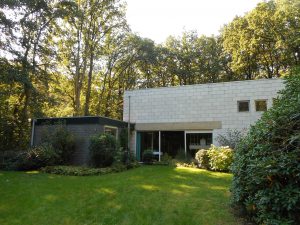 The LCC was founded by members of the Theosophical Society in 1916 to offer the pure sacrament, incorporating the Ancient Wisdom in a Christian context. In the chapel garden the remains of a small private chapel can be found. The other side of the beech hedge is the site where a large church for the LCC was built in 1927, which it burnt down shortly after its consecration.

The Garden of Remembrance 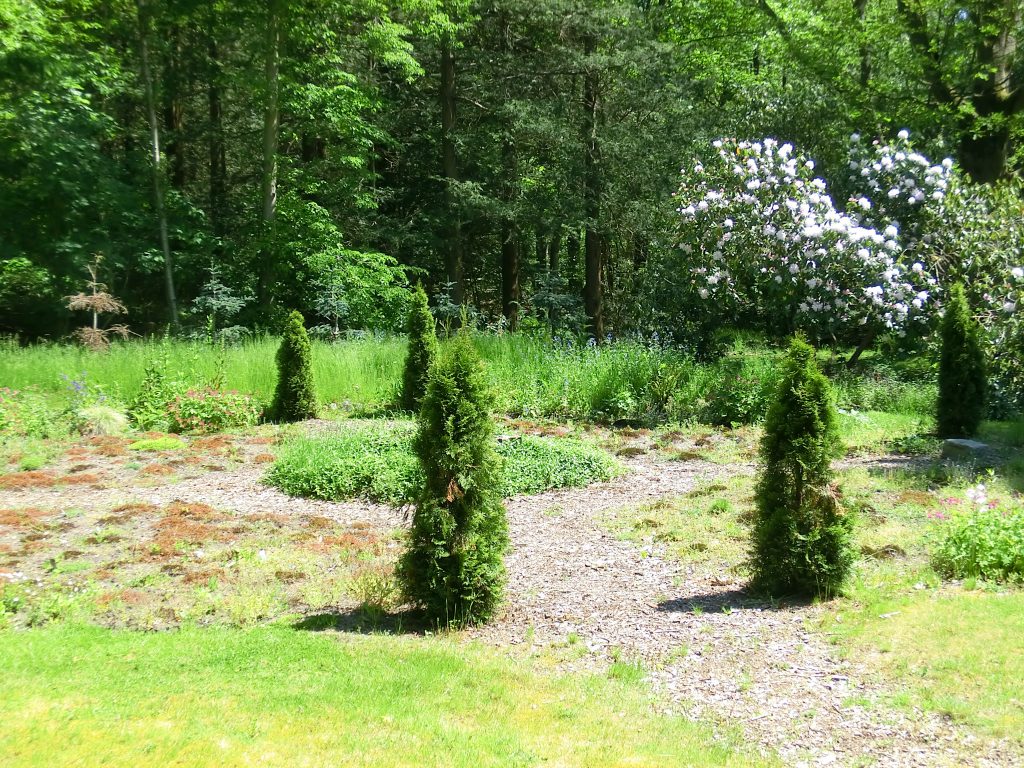 In 1937 the site of the old church was redesigned as a Garden of Remembrance. One can clearly see the special design, with the positioning of the trees, the pond, the circle, and the rose in the cross in the middle. The garden was largely replanted in 2020 and then consecrated by two priests of the LCC, together with children of the Round Table.

For many, the Garden of Remembrance is one of the most potent places at the ITC. You are welcome to enter and meditate here.

St. Michaels House and its gardens 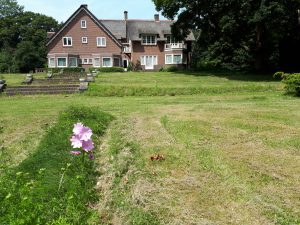 Following the Thuja path, the main mansion becomes visible: St. Michaels House. It was built in 1912 as the summer house of a wealthy family and is now the dwelling of our workers and used as an office as well as for internal meetings. The English Garden on the right was designed by two well-known garden architects, L.A. Springer, and D.F. Tersteeg. Maintenance is carried out by an enthusiastic group of volunteers.

In the English garden are two beautiful statues on either side of the pond, one of Buddha and one of the goddess Tara, male and female, facing each other.

All spiritual statues at the ITC are consecrated and surrounded with a special spiritual atmosphere. You are welcome to sit in their presence. The Buddha statue originated from Thailand. Tara appears in both the Hindu and Buddhist pantheon, and is widely revered today, in both East and West. In the Buddhist tradition she is even considered a female Buddha. Like the virgin Mary, Devi Tara is called upon when in need. This Tara statue is part of the Indonesian Hindu tradition.

The former tennis lawn, the cottages, and the meditation garden 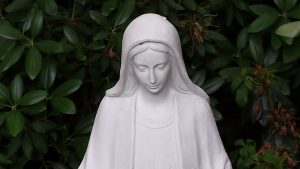 Behind the beech hedge is the former tennis lawn. Plans are in progress for the creation of a labyrinth here. On the left, three wooden cottages become visible, built in 2013 for those who prefer an individual place for study or retreat. Opposite the cottages is the meditation garden where Buddha and Mary statues are facing each other, again an ideal place for meditation. When walking past the cottages and the camping facilities on your left, you will see a small wood on the right, ending in an open field. This is the summer campsite for the Round Table. You can imagine the joy children are having here. The building, Atelier, is being used by a yoga school.

Walking back to Besant Hall
When leaving the campsite and the meditation garden, you can follow the red arrows on the map to take you back to the Besant Hall: either the path along the northern section of the centre, or the lane with beeches along the southern fence. We hope you had an inspiring walk at the ITC!