The Emblem of the ITC 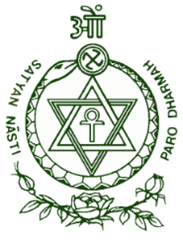 The emblem as a whole

The emblem or seal of the Theosophical Society is composed of several symbols, all of them having been used from ancient times to express profound spiritual and philosophical concepts about humanity and the universe. They may be found in a variety of forms in the great religions of the world and their universality is further shown by their appearance in widely separated cultures.

Each symbol, studied separately, will yield a wealth of understanding, but none of them can be interpreted with a narrow precision. Taken together as in the Society’s seal, they represent a unity of meaning, suggesting a vast evolutionary scheme embracing the whole of nature, physical and spiritual. Study and contemplation of the emblem as well as its several component symbols will lead the serious student to an awareness of some of the deepest mysteries of existence. A few brief suggestions may be helpful to the enquirer looking at the seal for the first time.

The motto
Around the seal appears the motto of the Theosophical Society: ‘THERE IS NO RELIGION HIGHER THAN TRUTH’, or in Sanskrit: Satyan Nasti Paro Dharma. Truth is the quest of every theosophist, whatever his or her faith, and every great religion reflects in some measure the light of the one eternal and spiritual wisdom. Each points a way toward the realisation of Truth.

The word Religion in this statement is a translation of the Sanskrit dharma, which among other things means practice; way; virtue; teaching; law; inherent nature; religion; and that which is steadfast or firm.

The word Truth in the motto is a translation of the Sanskrit satya, meaning, among other things, true, real and actual. It derives from the root sat, sometimes translated as boundless unconditioned existence.

THE WHOLE SEAL speaks to an inner perception, to the intuition and to the heart, calling forth the divine in everyone who contemplates it. In its totality, it represents a synthesis of great cosmic principles operating through involutionary and evolutionary cycles, bringing us all, in the fullness of time, to the realisation of our divine nature.

IN THE CENTRE of the seal is the ANKH or CRUX ANSATA, an ancient Egyptian symbol of resurrection. It is composed of the Tau or T-shaped cross surmounted by a small circle and is often seen in Egyptian statuary and in wall and tomb paintings where it is depicted as being held in the hand. The Tau symbolises matter or the world of form; the small circle above it represents spirit or life. With the circle marking the position of the head, it represents the mystic cube unfolded to form the Latin cross, symbol of spirit descended into matter and crucified thereon, but risen from death and resting triumphant on the arms of the conquered slayer. So, it may be said that the figure of the interlaced triangles enclosing the ankh represents the human triumphant and the divine triumphant in the human. As the cross of life, the ankh then becomes a symbol of resurrection and immortality.

THE INTERLACED TRIANGLES, one (lighter) pointing upwards and the other (darker) pointing downwards, symbolise the descent of spirit into matter and its re-emergence from the confining limits of form. They also suggest the constant conflict between the light and dark forces in nature as well as the inseparable unity of spirit and matter. When depicted within the circle of the serpent, the figure represents the universe and the manifestation of Deity in time and space. The three lines and three angles of each of the two triangles may remind us of the triple aspects of spirit: existence, consciousness, and bliss, and the three aspects of matter: mobility, resistance, and rhythm. The glyph can also be seen as the six-pointed star, embracing spiritual and physical consciousness, and viewed by the Pythagoreans as the symbol of creation.

THE SERPENT is the timeless symbol of the highest spiritual Wisdom. Swallowing its tail, it is a symbol of regeneration. It is the self-born, the circle of infinite wisdom, life and immortality. The circle itself is an ancient symbol of eternity and represents the Absolute, the un-manifested universe containing the potentials of all form. As representative of the infinite sphere, the “world egg” of archaic cosmology, this symbol is found in every world religion and philosophy.

THE SWASTIKA, placed in the emblem at the head of the serpent, is one of the numerous forms in which the symbol of the cross is found. It is the fiery cross, with arms of whirling flame revolving clockwise to represent the tremendous energies of nature incessantly creating and dissolving the forms through which the evolutionary process takes place. In religions which recognise three aspects of Deity, the swastika is associated with the Third Person of the Trinity, who is at once the Creator and the Destroyer: Shiva in Hinduism and the Holy Ghost in Christianity. Applied to humanity, the figure may show the human as the link between heaven and earth, one “hand” pointing toward heaven or spirit and the other toward earth or matter.

ABOVE THE SEAL, in Sanskrit characters, is the sacred word of Hinduism, AUM or OM, a word of profound significance. It may be said to stand for the creative Word or Logos, the ineffable Reality which is the source of all existence. We are reminded of the statement: “In the beginning was the Word, and the Word was with God, and the Word was God.” Om is a word of power and should be uttered only with the greatest reverence.

The roses represent beauty, and important aspect of the work of the ITC. It is beauty which inspires us, which touches us. Experiencing beauty makes that the mind is still. In beauty Truth can reveal itself.

Find us on Social Media

You can find our previous newsletters in the Centre News archive.

FRIENDS of the ITC

Support ITC and join the FRIENDS of the Centre! Download the leaflet and fill out the application form here: Friends of the Centre