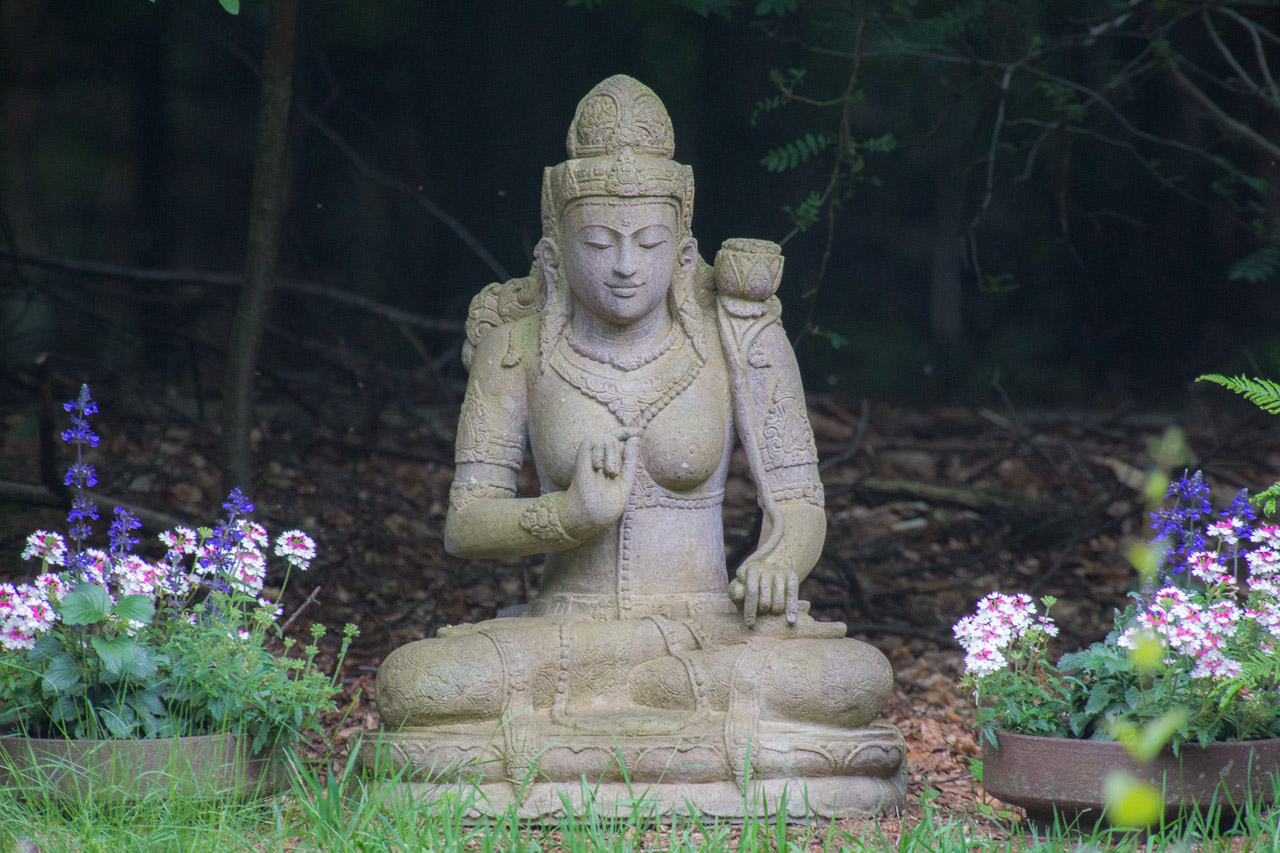 Tara as a goddess can be found in many traditions, which is inspiring, but also confusing. Tara appears in both Hindu and Buddhist pantheon. In Japan she is known as Tara Bosatsu, she is the mother goddess in Druidic religion, a sea goddess in Polynesian mythology and a goddess in Estonian mythology. As such, she is comparable with the virgin Mary, being called upon when in despair. Devi Tara, as placed in the garden of St. Michael’s House, is part of the Indonesian Hindu tradition.

The Devi Tara statue at the ITC 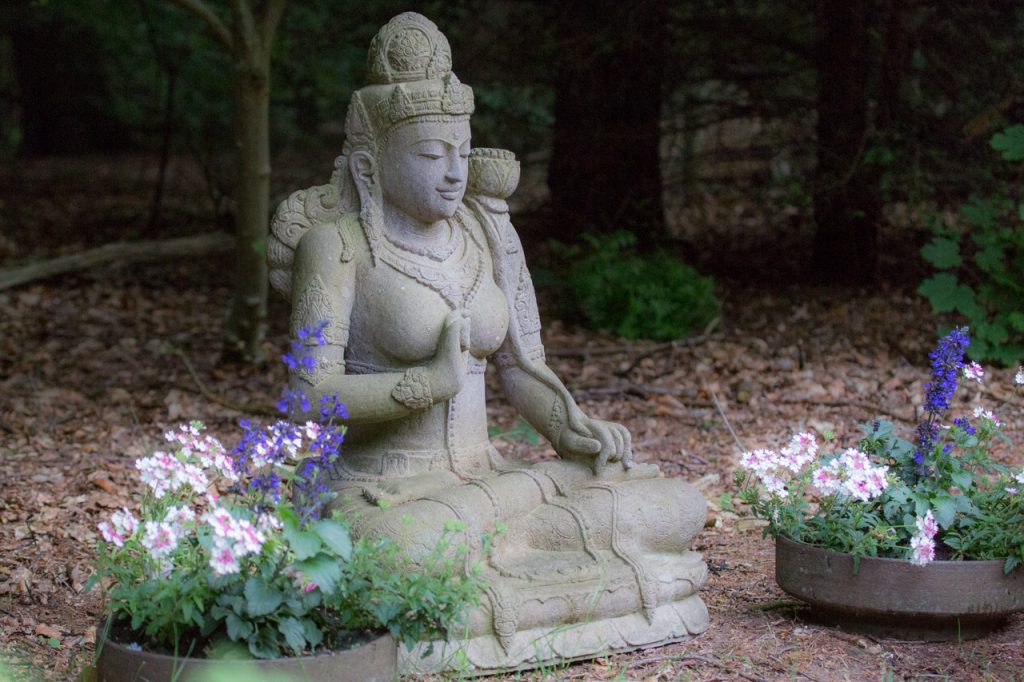 The Devi Tara statue at the ITC was recently made in Indonesia from hard lava rock. The style shows a remarkable resemblance to a famous statue of Prajñāpāramitā, as found in the Museum Nasional in Jakarta, made in the 13th century. The stem of a lotus is held in her left hand, with the flower on her left shoulder as a symbol of beauty and rebirth.

She wears a small stupa on her head and has beautifully carved hear on her back. The statue is placed in the garden just opposite of the Buddha statue, as a female Hindu companion, as shown in the pictures. According to the Javanese tradition, Tara (or Devi Tara) is the daughter of Indra and his wife Wiyati. In the Ramayana, Tara is the wife of the monkey king Vali, who married Vali’s brother and successor, Sugriva, after Vali’s death.

The Devi Tara symbol in India and Tibet
It is not clear whether the Tara figure originated as a Buddhist or Hindu goddess. The earliest clearly identifiable – and meditative – image of Tara is found within the Buddhist Ellora Caves in Maharashtra (6th or 7th century CE), which seems to indicate a Buddhist origin. Later statues show a more fiercely image. Today, she is worshipped both in Buddhism and in Hinduism as one of the ten Mahavidyas or “Great Wisdom goddesses”, Tantric manifestations of Mahadevi, Kali, or Parvati. 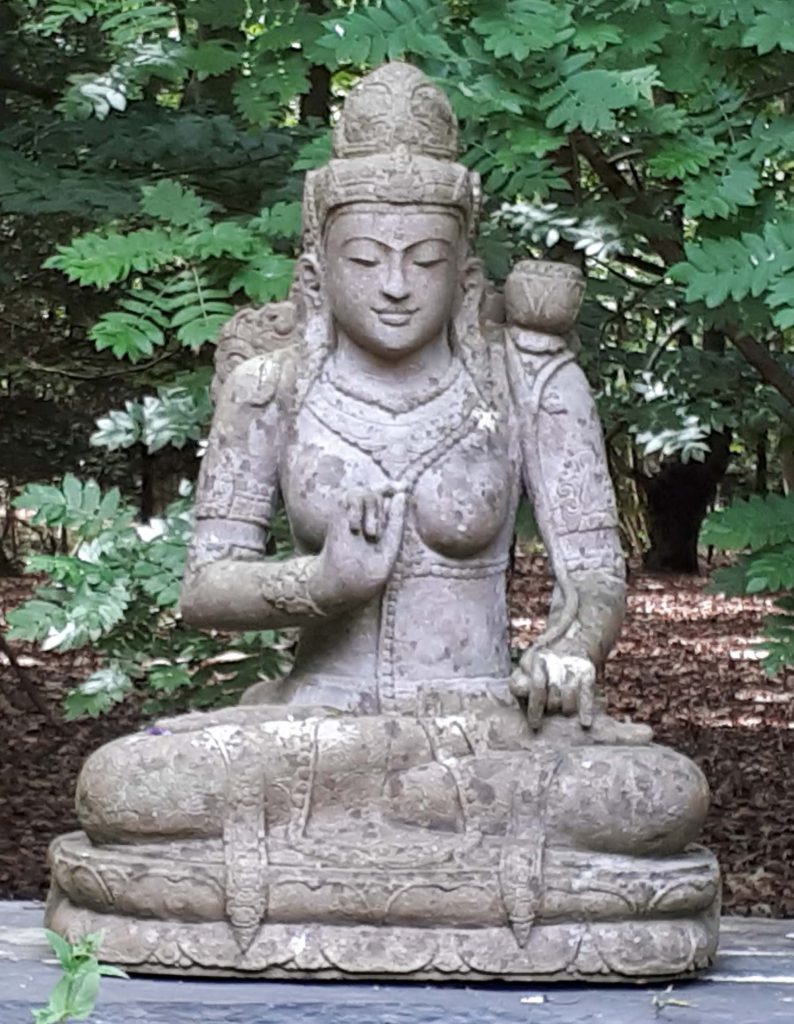 In Hinduism, Devi Tara refers to different aspects. Tara is the name of the star which showed the way to Indian sailors. Her support was called upon for a safe passage. As star goddess she is considered a manifestation of Kali. In Hinduism, the goddess Tara meaning “star”. As the star is seen as a beautiful but perpetually self-combusting object, so Tara is perceived at core as the absolute, unquenchable hunger that propels all life.

The Theosophical Encyclopedia refers to the Puranic legends, where Tara is the second wife of Brihaspati who is the equivalent of Jupiter and the spiritual guru of the gods.

Tara was carried off by Soma (Moon) and bore a son named Budha (Wisdom), who is considered to have written a hymn in the Rig Veda. In The Secret Doctrine, H.P. Blavatsky indicates that Brahmanaspati (Brihaspati) represents the materialization of the divine grace through exoteric rituals and ceremonies, while Tara – his wife – is the personification of an initiate in the gupta vidya (secret knowledge). Through soma (the sacred beverage of the rishis), Tara is initiated in the mysteries, which results in Budha (esoteric wisdom).

Tara was introduced relatively late – probably after the year 1000 CE – in the Buddhist pantheon, as the female aspect of Avalokiteshvara. The green Tara in particular is relatively wellknown, as the most important female manifestation of enlightenment, the prosperous great mother of nature and Mother of all Buddhas. Moreover, blue, red, white, yellow and black Taras are known, each representing different aspects.
The main Tara mantra in Sanskrit is the same for Buddhists and Hindus alike:

It is pronounced by Tibetans and Buddhists who follow the TIbetan traditions as oṃ tāre tu tāre ture soha:

Find us on Social Media

You can find our previous newsletters in the Centre News archive.

FRIENDS of the ITC

Support ITC and join the FRIENDS of the Centre! Download the leaflet and fill out the application form here: Friends of the Centre